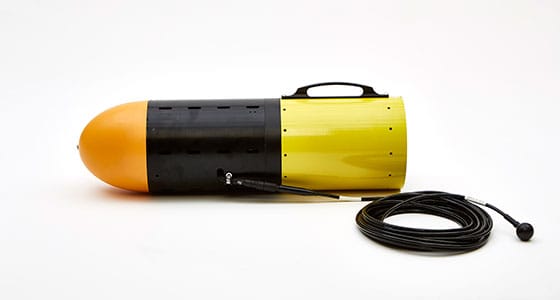 Scanmatics Sonar Transponder Module. Photo: Teledyne Gavia
Scanmatic’s Sonar Transponder Module (STM) receives and analyzes audio signals from sonars, and generates an echo or emits pre-stored audio signals. In “echo repeat”, STM adds a signature to the received sonar pulse and sends back this modified audio pulse. For a sonar operator, it looks like there is a real submarine on the sonar screen.

Scanmatics STM is an independent module that allows any AUV to be converted into a sonar training target. Today, military AUVs are used primarily to look for mines or obtain one-way information. With the Scanmatics STM, the same AUVs can also be used to train the departments in the Navy that focus on underwater warfare.

The STM consists of a water-filled part with hydroacoustic transducers, an air-filled electronics module that communicates with the AUV’s brain and hydrophone(s) Attached to, or towed behind, the AUV. The STM can simulate a wide range of realistic goals and is a cost-effective tool for sonar training.